THEORY OF A PENDULUM AND OSCILLATIONS

The pendulum is weightless at the highest point, or has reduced gravity at the certain point. At the same time, centrifugal force is zero. 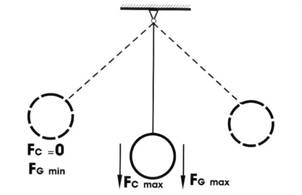 At these minimal forces, or zero forces at the highest point, which are very interesting with double oscillations, because they culminate at the lower point.

Because of the centrifugal force at the lower point, the force of the pendulum culminates because of the fastest movement. And the gravitational force is at maximum because the pendulum falls down and then rises again.

Therefore, it is impossible, or very hard, to stop the double oscillation.

This simple formula explains everything, since the kinetic energy increases with velocity squared. This is just an addition to kinetic energy, since we know that from traffic. At a double speed, skid marks are four times longer.

We can observe oscillations around and withinin us. One of the books dealing with the same topic is "The Theory of Oscillations"

It states and clearly explains that oscillatory movements are the most frequent movements in nature. Oscillations, therefore, are around and within us.

Here is how. If we start from us - humans, our hearts, lungs, blood stream and limbs all oscillate. Our voice oscillates, as we make sounds. Light oscillates, or light rays, as well as sound. Here, we are talking about waves, which happen with water as well. There are bigger and smaller waves. Then, all animals oscillate. At first sight, plants do not oscillate. But, trees oscillate, when the wind moves the branches.

Oscillatory movement is everywhere around us. These kinds of oscillations do not create any disturbances.